Charging of mobile phone batteries appears to be reaching new heights. When most of the top smartphone companies stuck to the 15W charger to fast charge the batteries in their respective models, some started experimenting with higher rated chargers. Now Xiaomi says it has developed a humongous 100W charger. What’s more, it also released a video which shows a 4000mAh battery being charged fully in a matter of just 17 minutes. Xiaomi calls it “Super Charge Turbo” technology.

This new record, if commercially established could break the performance of Oppo’s 50W Super VOOC technology. Oppo’s VOOC has a 50W charger and it has been shown to achieve 50% charging of a battery in 15 minutes. 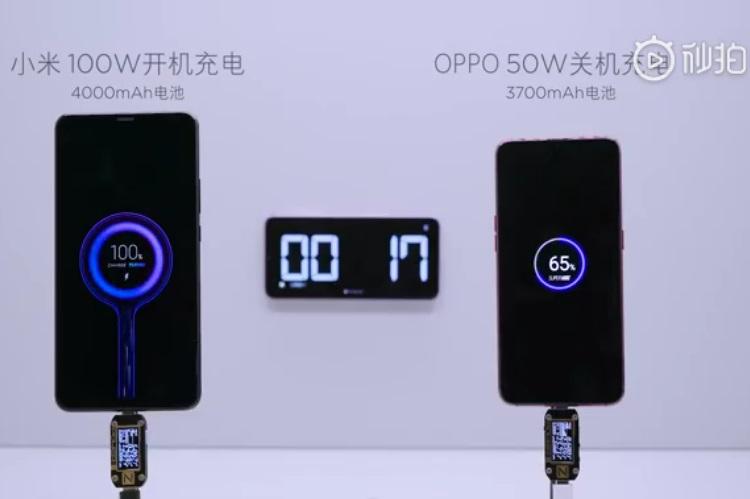 In the demo video, however, there are two phones on display, one being charged with Oppo’s 50W VOOC technology and the other, Xiaomi’s 100W “Super Charge Turbo” technology. The battery ratings were 3750mAh and 4000mAh respectively. And the result was evidently in favor of Xiaomi’s technology as mentioned above. It took only 17 minutes for the 4000mAh battery to be charged from 0% to 100%. In the same duration, the 3750mAh battery was charged 65%.

For the record, there is competition from OnePlus too. OnePlus has a fast charging technology, Warp Charge 30. OnePlus showcased it in its special edition, the OnePlus 6T McLaren edition and the Warp 30 is said to be capable of charging this smartphone model, to 50% in 20 minutes.

The details of this new 100W fast charging technology are yet to be shared by Xiaomi. The doubters may still reiterate their claim that any charger above 15W will be harmful to the life of the battery. But that again is something yet to be established.