Will Marijuana Be the Future of The Beer Industry?

Imagine meeting friends for a beer and choosing your drink not by type, but by the effect you want the beer to have. Also, imagine drinking your weed. This is the dream of Keith Villa, the brewer that created Blue Moon, one of the ideas behind his new company, Ceria Beverages. Ceria isn’t your average brewery, but is instead focused on making cannabis beer, a nonalcoholic drink that will get you a different sort of buzz. 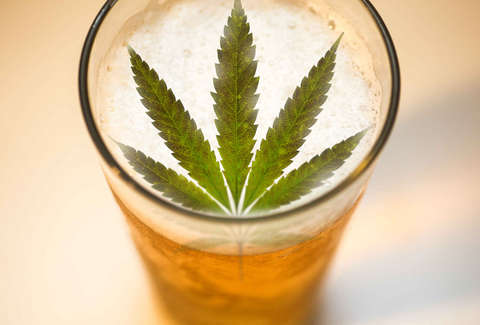 By next year, Ceria will release a THC-infused lager, IPA, and witbier. Villa partnered with a Denver cannaboid research company called Ebbu that, he says, can isolate compounds in order to cause specific sensations in the body. “Our light beer will have a low dose of THC so people can drink several without getting stoned,” he says, comparing it to Bud Light. “Or if they want a stronger sensation, they can get our IPA.

It will be equivalent to a regular IPA — have two, enjoy a decent buzz.” All this, according to THC beer advocates, will happen without hangovers or the threat of a beer belly.

“A lot of beer brands are realizing they’re in a great spot,” says Dooma Wendschuh, CEO of Province Brands, a Canadian start-up that in a few months will introduce the world’s first beer brewed with raw marijuana plants. Like all of these new THC beers, Province’s products promise to be hangover-less, low-calorie, and engineered so the dose-response curve is comparable to regular beer. The idea is to make them a go-to option for people who want a social dose, essentially replacing edibles. “Nobody,” Wendschuh says, “wants to meet the guys after work and eat a plate of gummy bears.”

To make its beer, Province uses the plant’s stalks, stems, and roots instead of oils or extracts. The process involves mashing beer as if the marijuana were barley or another grain, then removing the alcohol as if it were an O’Doul’s. The method, needless to say, is tricky. When they shopped their plan around to top brewers almost two years ago, Wendschuh explains, everyone balked. “They said, ‘This won’t work. Cannabis doesn’t have carbs, and you need carbs for mashing. What are you going to be using?’” And to be fair, the earliest test batches weren’t promising: They tasted like rotten broccoli and would have cost roughly $60 a bottle. Eventually, Wendschuh says, he worked with chemical experts to iron out the kinks, and will have the first batches available next year