This Woman from Kerala Has Proved ‘Age is Just a Number’

The 96-year-old Karthyayani Amma from Alappuzha, Kerala has become the oldest student to have cracked Kerala State’s Aksharalaksham literacy examination conducted by the Kerala State Literacy Mission Authority. She has scored 98 marks out of 100. For Kerala state, which is known for its highest literacy rate in the country, this feat is another feather on the cap. The pupils were tested on reading, writing, and mathematics. Karthyayani scored 38/40 in writing and 40/40 in reading and mathematics. 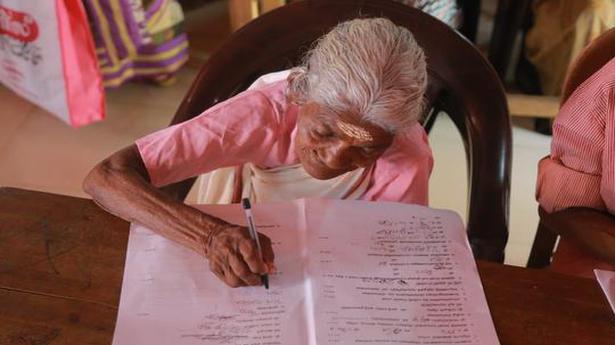 “She is very enthusiastic about education and it was reflected in marks she scored. She is eager to continue education,” Ms Sati, her teacher, said. The lady has never been to a school and worked as a domestic help and cleaning staff in a nearby temple.

As per the reports, Karthyayani will receive a merit certificate from Chief Minister Pinarayi Vijayan in a function to be held at Thiruvananthapuram.

It was Karthyayani’s great-granddaughters, Aparna (12) and Anjana (9), who helped her with her lessons. May this woman be an example for many and inspire each and everyone to take up education, for education alone can solve almost every crisis faced by our society.