The Highlights of the Golden Globe Awards

“Bohemian Rhapsody” was the big winner at the 76th annual Golden Globe Awards on Sunday evening, taking home the award for best drama film. Rami Malek also won best actor for his portrayal of Freddie Mercury in the film.Glenn Close took home the award for best actress in a drama film, upsetting Lady Gaga for her role in “A Star is Born.” Gaga and her team, however, did take home the award for best original song for “Shallow.” It was the singer’s second Golden Globe win in her career.The night began with celebrities arriving at the red carpet with messages of solidarity for the Time’s Up movement. Some wore black rubber bracelets while others wore pins referencing the group’s campaign to double the number of women in leadership positions.

“Bohemian Rhapsody” won both Golden Globe Awards it was nominated for on Sunday, best motion picture for drama and best performance by an actor in a motion picture. Rami Malek, who played Queen frontman Freddie Mercury, won his first Golden Globe Award for the role.”Thank you to Freddie Mercury, for giving me the joy of a lifetime. I love you, you beautiful man. This is for, and because of you, gorgeous,” Malek said.The movie chronicled the band’s career, leading up to its legendary performance at the 1985 Live Aid concert. Graham King, the film’s director, dedicated the win to Mercury, Queen’s late frontman.”Thank you for showing us the power for embracing your true self,” King said. “This one’s for you.” 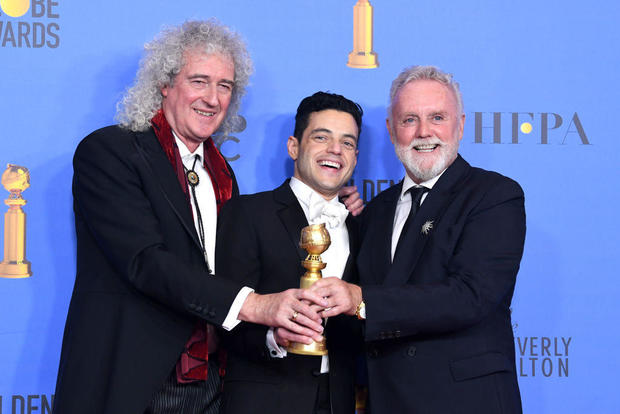 Glenn Close won best actress for her role in “The Wife,” a role that reminded her of her mother’s place in society and how women today can strive for more.”I’m thinking of my mom, who really subjugated herself to my dad,” Close said during her acceptance speech, noting that when her mother was in her 80s, she questioned what she had accomplished in life besides her role as wife and mother.”We have to find personal fulfillment, we have to follow our dreams, we have to say ‘I can do that’ and ‘I should be allowed to do that,'” Close said.

​Rachel Brosnahan: “Our village is a matriarchy”

During her acceptance speech for “The Marvelous Ms. Maisel,” Rachel Brosnahan took a moment to acknowledge the show’s female-dominated leadership. In the speech, Brosnahan noted in particular Amy Sherman-Palladino, the show’s executive producer.”Our village is a matriarchy,” Brosnahan said. “We have women in so many leadership roles.”Brosnahan won the Golden Globe Award for best actress in a television series in the musical and comedy category. The “Marvelous Ms. Maisel” star won the same award for the same role last year.

Jeff Bridges, known for his roles in “Big Lebowski” and “Crazy Heart,” won a lifetime achievement Golden Globe Award for his career in motion pictures. The Cecil B. deMille Award honors a “talented individual who has made a lasting impact on the world of entertainment.”In his acceptance speech, Bridges noted the importance of each individual and how each person can make a difference in improving their community.”We’re alive, we can make a difference, and we can turn this ship in the way that we want to go,” Bridges said.Bridges got an early start to his entertainment career. As an infant, he played an uncredited role in the 1951 “The Company She Keeps” and made appearances on his father’s “Sea Hunt” television show.Other recipients of the Cecil B. deMille award include Audrey Hepburn, Robert De Niro, Harrison Ford, George Clooney, Jodie Foster, Robin Williams and Oprah Winfrey. 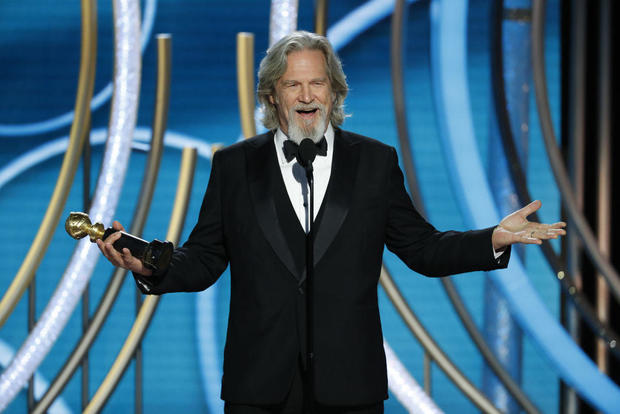 Jeff Bridges accepts the Cecil B. Demille Award on Jan. 06, 2019 in Beverly Hills.

On Sunday, Carol Burnett became the first recipient of the Golden Globes’ TV Lifetime Achievement Award, which is named after Burnett herself.During her acceptance speech, Burnett spoke about falling in love with movies and television as a child and her young dreams of working in entertainment. “I wished and hoped that maybe just maybe, someday I’d have a chance to do the same thing.”Burnett, whose career in television spanned seven decades, is best-known for her CBS variety show, “The Carol Burnett Show,” which ran from 1967-1978 and was the first show of its kind to be hosted by a woman.

Regina King: “Everything I produce is going to be 50 percent women”

During her acceptance speech for her work in “If Beale Street Could Talk,” Regina King voiced her support for “Time’s up x2” with a hiring promise to include more women. “I’m making a vow — and it’s going to be tough — that everything I produce is going to be 50 percent women,” King said after winning best supporting actress in a motion picture.King also encouraged viewers to join her, saying: “I challenge anyone out there who is in the position — and not just in our industry, but in all industries – I challenge you to challenge yourself.””The reason why we do this is because we realize that our microphones are big and that we speak for everyone,” King said. 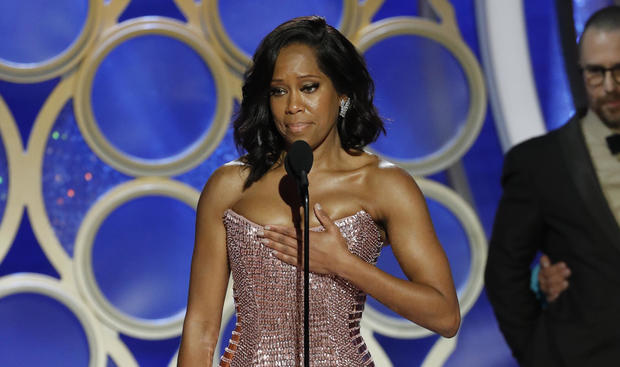 Lady Gaga teared up as her team accepted their Golden Globe for “Shallow” from “A Star is Born.”Lady Gaga, Mark Ronson, Anthony Rossomando and Andrew Wyatt all were honored on Sunday night for best original song in a motion picture. 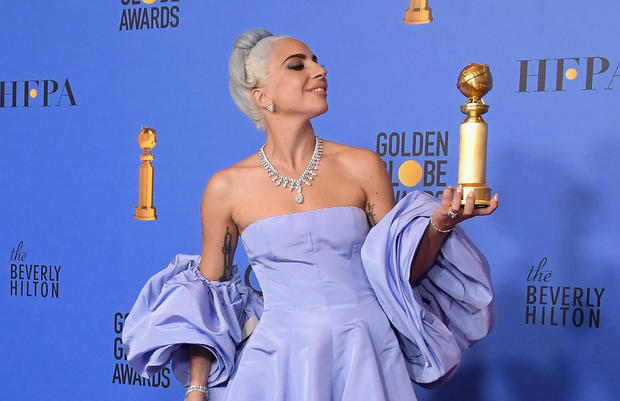 The president of the Hollywood Foreign Press Association took the stage to announce grants totaling $2 million toward climate change journalism and protecting newswriters around the world.”This is our story to tell, this is our story to write, this is our stand to take,” Meher Tatna said onstage at the Golden Globe Awards, which is organized by the association.The organization will give $1 million each to the International Reporters Committee for Freedom of the Press and InsideClimate News, Tatna said.

​Sandra Oh: “Right now, this moment, this is real”

At the Golden Globe Awards opener, Sandra Oh took a moment to acknowledge the strides that Hollywood has made in the past year to address diversity and sexism in the entertainment industry.”I said yes to the fear of being on this stage tonight because I wanted to look out onto this audience and witness this moment of change,” Oh said during her and Samberg’s introduction of the show.”Right now, this moment, it’s real.”

Sandra Oh and Andy Samberg took the stage to kick off the 2019 Golden Globe, joking they only got the job because they were the last people in Hollywood who hadn’t gotten in trouble for offensive remarks.The duo got the show underway with a fake “roast,” paying compliments to attendees around the room. Oh joked that “A Star is Born” lead Bradley Cooper was “hot” and Samberg said Spike Lee “did the right thing” with his award-winning directing. Samberg joked that he wishes Jeff Bridges, recipients of this evening’s Cecil B. DeMille award, was his dad.

Stars wear Time’s Up bracelet on the red carpet

Stars wore Time’s Up bracelets and pins on the Golden Globes red carpet Sunday in support of the raising awareness against sexism in the entertainment industry and beyond.The accessories were designed by “Nocturnal Animals” costume designer and stylist Arianne Phillips, who designed the movement’s logo and official pin.