We all are familiar with the story of Paul the Octopus who had predicted right outcomes of the matches in the 2010 FIFA World Cup including the finals where Spain had beaten Netherlands.

Though Pauly passed away without being able to pass on his psychic skills to the next generation, he would have proudly embraced Rabiot, a giant octopus from Japan as his own descendant.

By the way, Rabiot is a giant octopus who was caught in Obira, Hokkaido, Japan, who predicted Japan Football Team’s Group Stage results correctly.

Rabiot, the pacific octopus, was absolutely right in his predictions that Japan would beat Colombia in their opening World Cup match, draw with Senegal and lose to Poland.

The octopus made his predictions by being put into a paddling pool with three baskets that held flags of Japan, the opponent and a signboard that read “draw”. However Rabiot wasn’t fortunate enough to predict the result of Japan vs Belgium as he had already ended up as someone’s dinner.

Weird, right? I know! It seems like Japanese people love their food more than their football team. 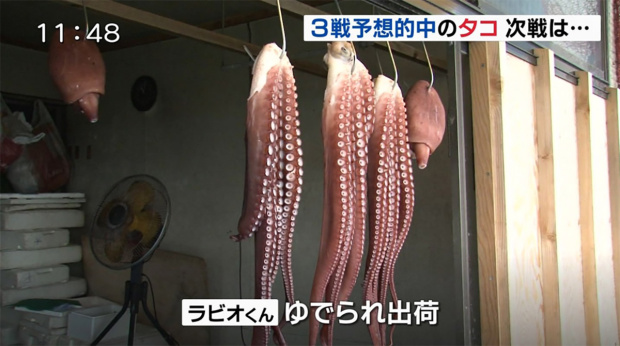 Pictures of what appeared to be Rabiot the octopus put up to be sold at a fish market were shared on social media. Kimio Abe, the fisherman who had caught Rabiot says that, he believed running business was more important than keeping the psychic octopus alive. It looks like Kimio Abe was sending out his own message by slaughtering Rabiot annnnddd yes, Japan got  defeated at the hands of Belgium as well.

I wish Rabiot had been equally good at foreseeing his own future as he was Japan’s World Cup matches.