Lingerie That Will Make Women get into Football?

A lingerie company has launched a campaign to get more women into the World Cup. What innovative strategy did this company entice its consumer base with?

A pair of underwear that vibrate when footballers score. I couldn’t make this up if I tried…

Mexican underwear retailer Vicky Form unveiled the product ahead of today’s World Cup kickoff with a racy TV spot. The clip begins with a couple talking to the camera separately, with the woman moaning: “He is sick, honestly he is sick.”

“He turns on the TV and nobody else exists. What’s wrong with him? Because of football?”

Then a female narrator adds: “Vicky Form have found the solution so that both of them get equally excited. We have created the first pair of knickers that let you feel the passion of the match.”

The undies are linked to a robot that interprets the action and transforms it into vibrations in real time.”

The video then shows the couple sitting and watching a match — with the girlfriend wearing the vibrating underwear.

As the match becomes more exciting, she becomes more and more turned on until the referee fails to award an obvious penalty.

The man shouts: “No, no, no, that’s a foul!” The woman, angry at the stopping of the vibrations in her underwear jumps up and shouts: “Penalty! Blind referee, that’s a penalty!” The man looks at his girlfriend and moves closer to her, linking arms. 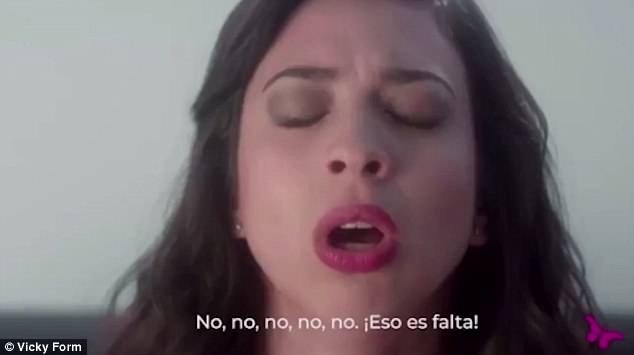 The spot has been a source of major outrage on Mexican social media, with hundreds of users calling it sexist.

One user wrote: “This is pitiful advertising. Clearly being able to understand or like sport does not depend on gender. Moreover, it sexualizes the woman it presents. Advertising with backward ideas.”

These vibrating chuds can be yours for only $999 pesitos and keep you and your partner excited through the entire tournament. Here’s the promise:

Until today women have not shared with their partners the passion with which they enjoy the soccer matches. That’s why we developed Feel the Game (Siente el Juego) the first smart panty that is synchronized with the games to transform the intensity of the plays in vibrations.

Ridiculous, unnecessarily sexual or attention-grabbing advertising? Let us know in the comments and make sure you drop a like on Facebook!