Neither the annual World Drug Reports prepared by the United Nations Office on Drugs and Crime, nor the yearly International Narcotics Control Strategy Reports (INCSR) prepared by the US Department of State, focus too much on India. Compared to global patterns, India is not considered a major producer of illicit drugs. But the country’s geographical location makes it an active point of transit for drugs, either coming from or bound for Europe, Africa, South East Asia or North America, says INCSR 2018.

“One of the prime external factors happens to be India’s close proximity to the major opium producing regions of South West and South East Asia, known as the ‘Golden Crescent’ and the ‘Golden Triangle’, respectively. The geographical location of India as such makes it vulnerable to transit, trafficking and consumption of opium derivatives in various forms along the known trafficking routes,” NCB’s 2017 annual report states. 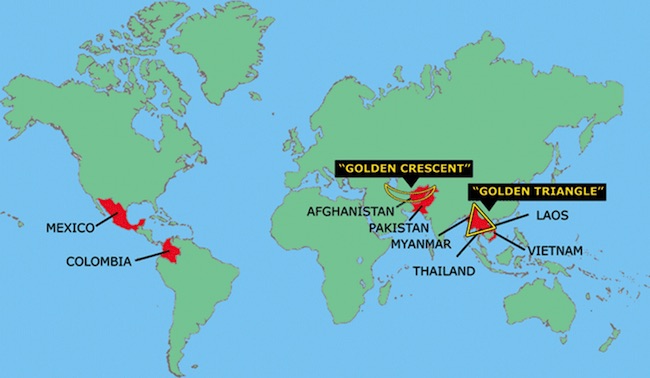 Traditional global opium/heroin hotspots. India is between the Golden Crescent and Golden Triangle.

Within India, Delhi, Mumbai and Bengaluru are major drug consumption spots, but other smaller cities can be major transit points. “If 100 kg of a drug comes to Chennai, about 1 kg will probably enter the city. The rest is headed elsewhere,” says an officer of the Narcotics Control Bureau (NCB).

Production of pharmaceutical drugs (like amphetamines, which are used in treatment of certain illnesses but can also be abused) and what are defined by the Narcotic Drugs and Psychotropic Substances (NDPS) act as ‘precursor chemicals’ (like ephedrine, which can be used to make drugs like methamphetamines – commonly known as meth – but have other legal uses), is one of the fastest growing problems in India as she becomes a major pharma producer. NCB officers say that India is gaining stature in the global meth trade, and is becoming a source of the drug due to the easy availability of chemicals. Several meth labs operated by international rings have been busted in the country. Illegal trade of prescription drugs through internet pharmacies is also increasing, the NCB says. There is also evidence of opium and cannabis being grown in several parts of the country – it is an open secret – and according to seizure reports, the biggest challenge. 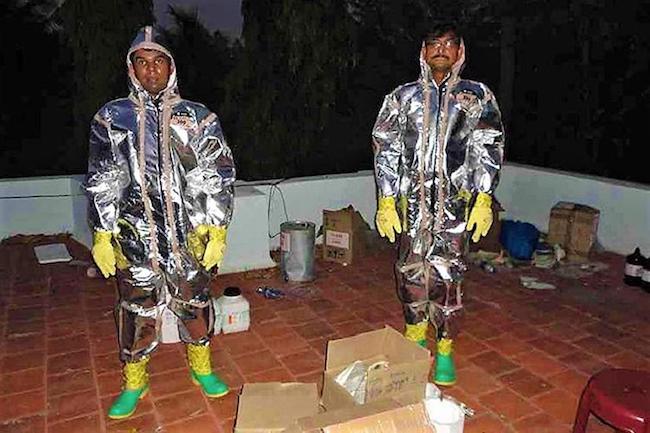 A meth-lab bust by NCB

In the global landscape, the abuse of party drugs like cocaine, MDMA or LSD in India does not raise eyebrows. The NCB’s annual reports also make it clear that the agency’s foremost focus is on the opium trade. “We are also focussing more on abuse of prescription drugs as the pharma industry grows,” says an experienced intelligence officer from NCB, “but that doesn’t mean the NCB doesn’t think of party drugs as a major challenge. Even the normal weekend parties at five-star hotels and resorts are becoming rave parties now.”

LSD (Lysergic acid diethylamide) or just ‘acid’, is available mostly as ‘blotters’ – a small drop of the drug on a tiny blotting paper. It is also available rarely in liquid form, and rarer still as powder. Sugar cubes with a drop of acid have also been seized in India. A drop of acid on blotter paper – usually carrying between 150 to 250 micrograms of the drug – costs around Rs 1,500, but highly potent varieties could cost up to Rs 3,000. (All rates mentioned are average street rates collated from narcotics officers and street dealers, but they could significantly vary across the country depending on the quality and customers.)

Bengaluru is becoming a hotspot for LSD, and an NCB field officer estimates that on a regular weekend, hundreds of blotters are being consumed in southern metros. The users tend to be upper-class youngsters who listen to psychedelic trance music and attend rave parties.

MDMA (chemical name ‘3,4-methylenedioxymethamphetamine’) is available in either its pure form as a powder, or as ecstasy pills, which have other ingredients in them. A gram of MDMA usually costs around Rs 6,000, while ecstasy pills are available for Rs 1,500, under fancy names like ‘Sprite’, ‘Nike’ and ‘Facebook’. LSD and MDMA/ecstasy are the preferred drugs in psychedelic parties, even as newer cocktail drugs – like LSA, DMT etc – continue to enter the market.

A gram of cocaine would cost at least Rs 8,000 in India. A cocaine habit can be extremely expensive, so its customers tend to be rich businessmen and their families. The cocaine trade – from international smuggling to street corner retail – is almost entirely controlled by Africans, according to NCB officers and peddlers. Vicky says, “Don’t trust the powder you get from Indian dealers, it will be celebrity coke.” Celebrity coke is the street name of highly adulterated cocaine for which celebrities pay a lot of money, because they don’t know the difference.

An intelligence officer (IO) with the NCB in a southern metro agrees with Vicky. “Forensic department guys tell us that they find impurities of up to 7 gm for every 1 gm of pure cocaine in the street products.” He adds, “If you ever come across a major Indian cocaine dealer, please let me know. They are very rare now,” he says, adding that there might be some small-time Indian peddlers. Africans are also known to fiercely guard their control over the trade, which often leads to violence. Incidents in Goa in 2013 are a case in point.

The trade patterns of LSD, MDMA and other psychedelic drugs are considerably different, point out narcotics officers. “The dealers might not do it just for the money, but it is a costly habit so the money doesn’t hurt. They earn the money to feed the addiction. They get into it as users, see the money, and then start dealing. People who are addicts are slowly moving into dealing,” the officer says.

“I have not seen even one uneducated LSD dealer so far,” another IO chimes in, “not one. Most of them are urban youngsters from the upper-class.”

Another NCB officer says, “One major difference I have seen is that most Africans in the cocaine trade are not users. Some of them are strict Christians, we have often found Bibles and prayer counters during our raids. But with drugs like LSD or MDMA, and now DMT etc, we can clearly see that it is users who are getting into the trade.”

As the Zonal Director of NCB Bengaluru, with additional charge of the West zone, Sunil Kumar Sinha is considered an expert on LSD seizures by his colleagues. In his five-year ongoing stint at the NCB, he has been involved in interviewing several traffickers. “With LSD, every trafficker is a user. Every trafficker,” he says.

“At the beginning, I was just curious,” Vicky narrates, as we settle into a car for the interview. He is comfortable with his native tongue over English, and talks with ease and confidence. “It was a decade ago and I was on my first job, and I had no idea about these things,” he narrates. A colleague was looking up the dates for a rave party in Goa, and Vicky asked him what it was all about. When his friend returned from Goa, they had a small party in Chennai. He had his first taste of LSD that night. “We went online to figure out how to do it and made sure we were careful. It was amazing, I had never had such an experience before that,” he says, holding his head and shaking it vigorously, and beaming a smile.

“Then I felt that I should not depend on anyone for this. So, I went to Goa myself,” he says.

Although the availability of party drugs has increased tremendously in other cities, Goa continues to serve drugs with ease to those who come to its shores. In the absence of credible data on drug availability, only seizures by government agencies can indicate the extent of drug abuse. According to publicly available Drug Seizure Reports (DSR) data from the NCB, between 2014 and 2016, of the 48 seizures of LSD, MDMA or both (sometimes along with other drugs like meth) in India, 30 were from Goa. Most of the seizures in the state were from the Bardez region, which is home to the Anjuna beach, a world-famous rave destination. Only in the last couple of years have the seizures in Goa comparatively reduced, as cities like Bengaluru and Kolkata see a rise in consumption. Frequent crackdowns, the most recent one following the death of two youngsters due to a drug overdose in Anjuna, have also contributed to the stunted flow of drugs by the beaches of Goa. 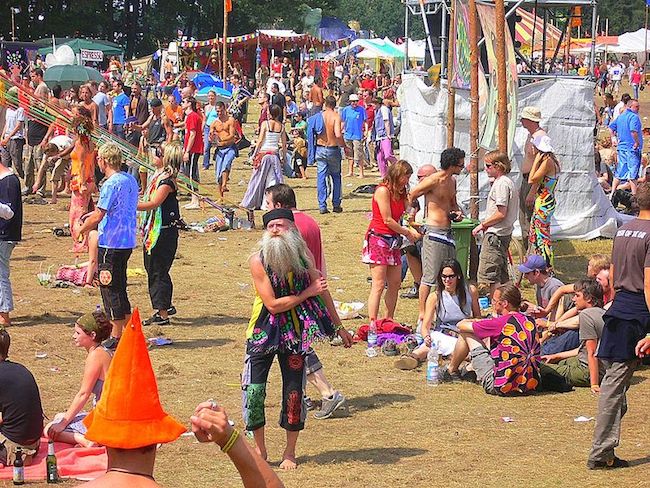 An open-air psytrance event in Goa in 2005

Interestingly, most psychedelic drug dealers have a Goa story. “Getting drugs in Goa was a cakewalk in those years. We just had to ask around, and we got whatever we wanted,” Vicky explains. A few months later, Vicky and his friends decided to get LSD and MDMA back home and host underground parties in Chennai. Now, organising and attending underground parties is a lifestyle for Vicky.

Over the years, Vicky’s network has grown. He knows dealers – his ‘friends’ – in Goa, Chennai and Bengaluru. He attends underground raves in holiday spots near major metros in south India. He explains that he only goes to small parties with close friends, “A bunch of us get together and split all the costs – the DJ, venue etc. No invitation for others.” He does not supply to more than 10 people at a time. “Anyone else asks, it is a strict no,” he says. But he refuses to accept he is a dealer. “This is not about money, I give it to people at whatever cost I get it for,” he claims, although his customers say that his rates are as high as the prevalent street rates. But he agrees he gets a thrill out of it.

The network grows in groups, and each group will be a closed group,” Sinha explains. Another senior IPS officer who has dealt with several cases of LSD in Hyderabad agrees, and says that there is a “groupism” in LSD dealing, and that in catching one person, they usually end up arresting more offenders.