Google’s “Neighbourly” app, which helps users with local information like nearby shopping arcades, parks, fitness, food and tuition centres is now rolling out to Indian cities such as Ahmedabad, Coimbatore, Mysore, Vizag, and Kota.

The beta version of “Neighbourly” is available on the Google Play Store for all Android devices within these seven cities in India. 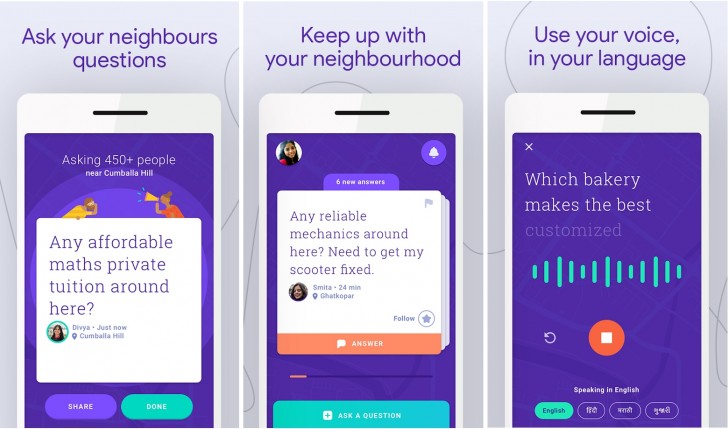 “With ‘Neighbourly’, we are able to address the local information needs of India’s fast-growing internet users in their neighbourhood,” Josh Woodward, Group Product Manager, Next Billion Users team, Google, said in a statement on Wednesday.

The latest version of the application also comes with three new updates. First is enhanced voice input with better controls so users can ask and respond to questions in their spoken language.

The other feature is quick replies using which, when a question is asked, and the user wants to clarify something about an answer, it can be done using the inline reply feature.

“The app was first rolled out to Mumbai and Jaipur and 20 per cent of people tap to speak their question and each question, spoken or written, gets an average of four relevant, trusted answers,” Google said.

“During the last three months, we’ve been excited to see how neighbourhoods, big and small, are using the app across Mumbai and Jaipur. From what we’ve seen, neighbours from different backgrounds and ages are eager to help each other by answering questions. In fact, some of our “Top Neighbours” answer over 100 questions per week,” the company said in a statement.

The launch took place after the company’s extensive user testing in the past several months, where Google’s “Next Billion Users” team conducted a series of studies and spoke to locals in neighbourhoods.

“The response was encouraging — especially among women, students and daily commuters — and people appreciated using their local language to ask questions to their neighbours and sharing their own knowledge with others,” the firm added.