A drug sniffing dog in Colombia is so good at her job that a drug cartel has placed a bounty on her head.

A six-year-old German shepherd named Sombra, the Spanish word for “shadow,” has worked for Colombia’s anti-narcotics force since she was a puppy, and she happens to be very good at her job.

Imagine being so good at your job that hundreds of people want you dead.

Sombra’s hard work has helped police complete at least 245 arrests, and she has uncovered more than 2,000 kilos of cocaine stashed in fruit shipments, boats, and suitcases in Colombia’s busy port city of Turbo.

The police have moved Sombra from Turbo to the capital city of Bogotá to sniff at the country’s main airport, El Dorado. They believe she is safer there, in a location outside of the Urabeños’s main influence.

Colombian police like to say she’s been targeted for taking a bite out of crime.

They really need to make this into a TV show. 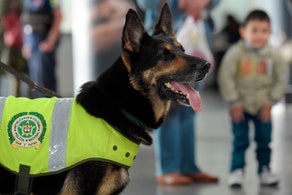 Sombra’s talent got the attention of Colombia’s largest drug gangs, the Urabeños, or Gulf Clan who placed a bounty of 200 million Colombian pesos ($70,000) on her head.

“The fact they want to hurt Sombra and offer such a high reward for her capture or death shows the impact she’s had on their profits,” said a Colombian police spokesperson.

After a six hour shift, Sombra is escorted home  in a van with tinted windows, surrounded by armed guards.