Internet’s “egg” has competition, from a coconut shell. After Kylie Jenner’s Instagram post on a stock image of an egg garnered 26 million likes, a product on Amazon – a coconut shell. 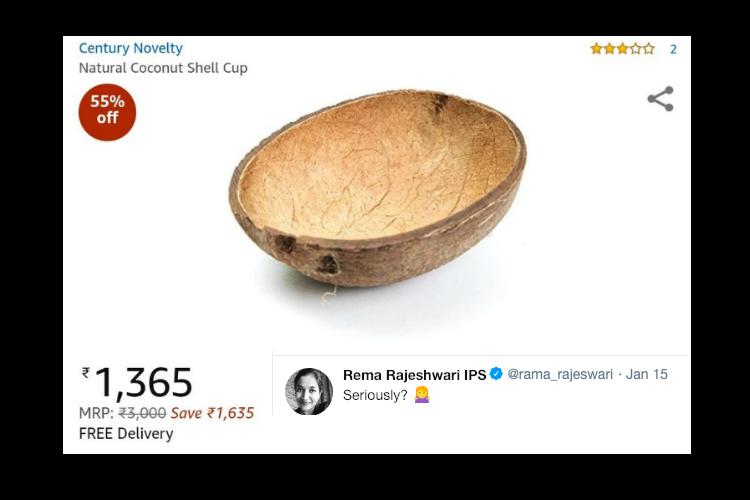 It was not the fact that a normal semi-circular coconut shell is for sale an e-commerce platform, but the price at which it was being sold. The coconut shell, which is usually sold at (Rs 5) or usually lies abandoned in the backyard of several houses, is priced at Rs 1,365, that too, for half a coconut shell. This left many shell-shocked.

The product, titled Natural Coconut Shell Cup, comes with certain specifications: Holds approximately 4 1/2 ounces, approximately 1.5 tall and 4.5 wide. “This is an actual, real, coconut. Therefore, it may have cracks, dents and imperfections”, comes the warning from the seller Century Novelty. But thanks to the offers, the price fell from Rs 3,000 to Rs 1,365 and now to Rs 999, of course. The product even had an EMI option when it was priced at Rs 1,365.

This natural coconut is branded as a “tropical tableware” for a Luau party. According to the seller, no luau party is complete until everything is Hawaiian, and so the coconut cups. “You can use the Hawaiian coconut cup for serving tropical drinks or as a luau table decoration, be creative! Coconut cups are a must have Hawaiian accessory for tropical theme events like Hawaiian Luaus, corporate parties, weddings, and more. Serve up beach drinks in authentic coconut cups for an instant tropical beach atmosphere,” it reads.

The product on the Amazon international website received good reviews. A user bought a pair of the shells to go with his Halloween costume as King Arthur (from Monty Python and the Holy Grail), to clop together to make horse sounds. Some of the other uses the buyers found include to decorate a painted palm tree and to make a bicycle helmet for a stuffed lion.

The debate on the coconut shell and its price surfaced when Mahbubnagar District police chief Rema Rajeshwari IPS tweeted the screenshot of the page. Not surprisingly, the cup hilarious reactions from the Twitter users in India.

Me thinking about the 1365 coconut shells we threw in the trash can last year 😫 https://t.co/FwbzAoiZWN