Located in Coventry city, this museum is the place you want to visit to see some of the most exquisite vehicles to ever hit the roads.

Since Coventry city was the centre of the British car industry, this museum fits in perfectly. It began operating in 1937 when Samuel Bartleet gifted his private collection of cycles to the city. The first motor cars were added to the collection in 1952 and major public exhibitions began in 1960. The museum initially held its place in the Herbert Art Gallery And Museum. A space that the museum outgrew in 20 years since the exhibitions began. The museum settled into its current place in 1980.

the ‘Star Vehicles’ on display are:

The museum has the 500,000th TE20 tractor built by Ferguson in the Banner Lane Factory in Coventry. It had a 20cc  SMC diesel engine. The tractors production stopped by 1956 when the market required tractors with higher work capacity. 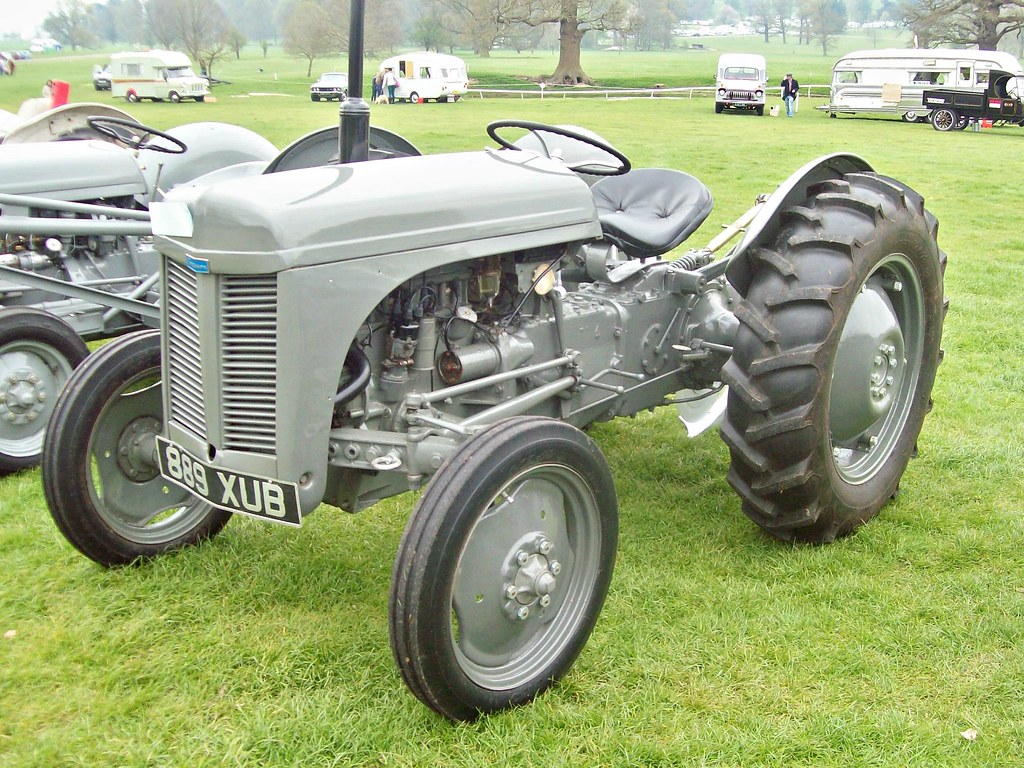 Built in 1898, this is one of the oldest cars to be built in Coventry. Built a year after Diamler was founded, It was styled as ‘Phaeton’, a Greek God who rode the ‘chariot of the sun’ too fast. This style was seen as sporty and the carriages were meant to be driven at high speeds. Made by Starley&Hillman in 1871, this was a 50lb cycle which was almost completely built out of steel. the braking was operated by twisting the handle-bars and pedals were directly attached to the front wheel. it had solid rubber tires. All this made operating the cycle a tad bit harder.

With hand-built wooden bodywork and leather upholstery, this car is a great example of the luxuriousness associated with owning automobiles in England about a century ago. the car has a huge 6-cylinder engine that is rated over 3000cc. This let the car reach 40mph. but with only rear drum brakes, it was difficult to slow the car down. The car was built in 1907 and donated to the museum in 1959.

Built in 1929, this car has a fabric body woven over a wooden frame. the engine is a 9hp four-cylinder side valve that pushed the car to 50mph approximately. this fabric-over-wood or ‘Waymen’ design vanished in the late 1930’s when all-metal bodies were mass produced.

this is an armored car from the World War 2.Called the ‘Mark 1 Daimler Armoured Car’, It used a modified version of the 4 litre Daimler car engine. Each wheel has independent suspension and a permanent four wheel drive system. when prepped for war, this bad boy carried a two pounder gun and a Bren machine gun mounted on the turret. the car had armor plating that weighed about 7 tonnes.

Famous as General Montgomery’s ‘victory car’, this open-top tourer came into existence when many car makers shifted to making war equipment and transportation. Montgomery used this car in the North African Campaign where this car covered 60,000 miles in under six months and this car needed no maintenance other than normal servicing.

Named ‘Queen Mary’s Royal Car’, this car served HM Queen Mary from 1935 to her death in 1953. It was then acquired by the National Motor Museum in mid 1950’s and was loaned to the owners of the luxury-liner ‘Queen Mary’. The car was displayed on deck for ten years where it suffered from the environment and even more from the damp, salty water. It was bought for the Coventry museum in 1984 and has been restored to its former glory. 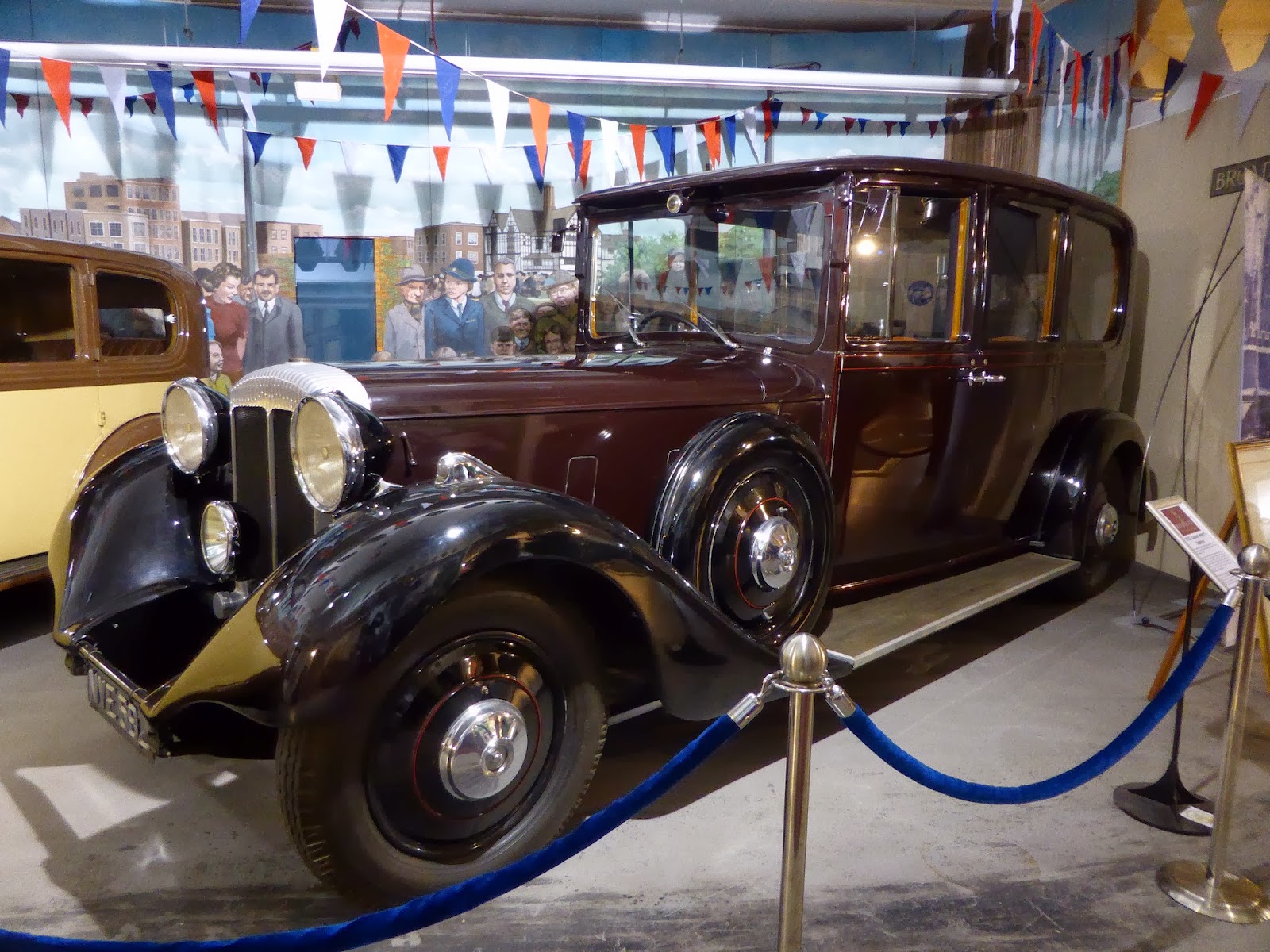 This car was the top-of-the-line from Humber. It is equipped with a Armstrong Selecta-ride suspension, a straight six, 3–litre engine and a three speed automatic gear box and was directly bought from the Rootes group who had been using it as a staff car in 1970. 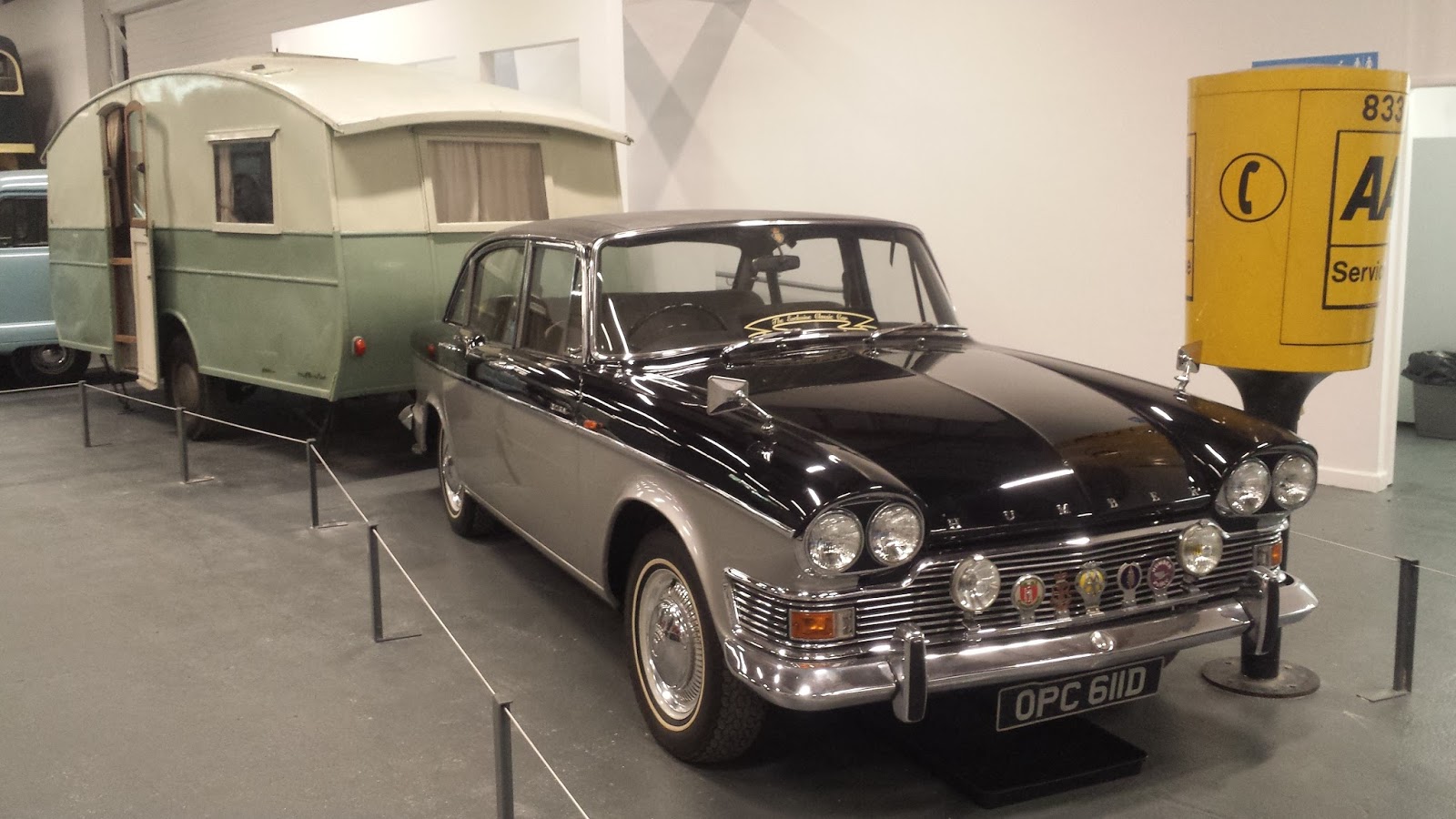 This car was introduced in 1968 as an upgrade to the Scimitar GT Coupe. The bodywork was fibre-glass and it was equipped with a Ford Essex over-head valve V6 engine. The car’s fame skyrocketed when Prince Charles and Princess Anne bought one. n the 1970’s, the car had enough popularity for Reliant to drop the Scimitar GT and concentrate on the Scimitar GTE Estate.

This is a special edition Bonnie that was launched in 1977 on the occasion of the Queens silver jubilee. The Bonneville T140 was first launched in 1959 and was the ‘highest performing mass produced motorcycle’ at that time.

Seven years after the Rootes Group took over Singer Car Company, the Singer Gazelle Series V was launched in 1963. The Series V Gazelle had a number of improvements over previous models. These included a re-styled tail, disc brakes on the front as standard, a new facia and improvements to the seating and equipment.

Designed and built by John Kemp in 1885, this was the turning point in cycle designs. It was the first cycle with a chain-driven rear wheel. This design became so popular that many cycle makers started basing their cycles on this design.

Named the ‘Transworld Trumpet’, this motorcycle is one of the most celebrated motorcycles in existence. In 1973, Ted Simon embarked on a trip around the world on this bike. The trip covered 50,000 miles and took four years to complete. The motorcycle is retained in the same condition that it was in when it returned to England. The panniers on the side also display the route taken. Ted Simon personally rode to the museum and donated the bike in 1978. 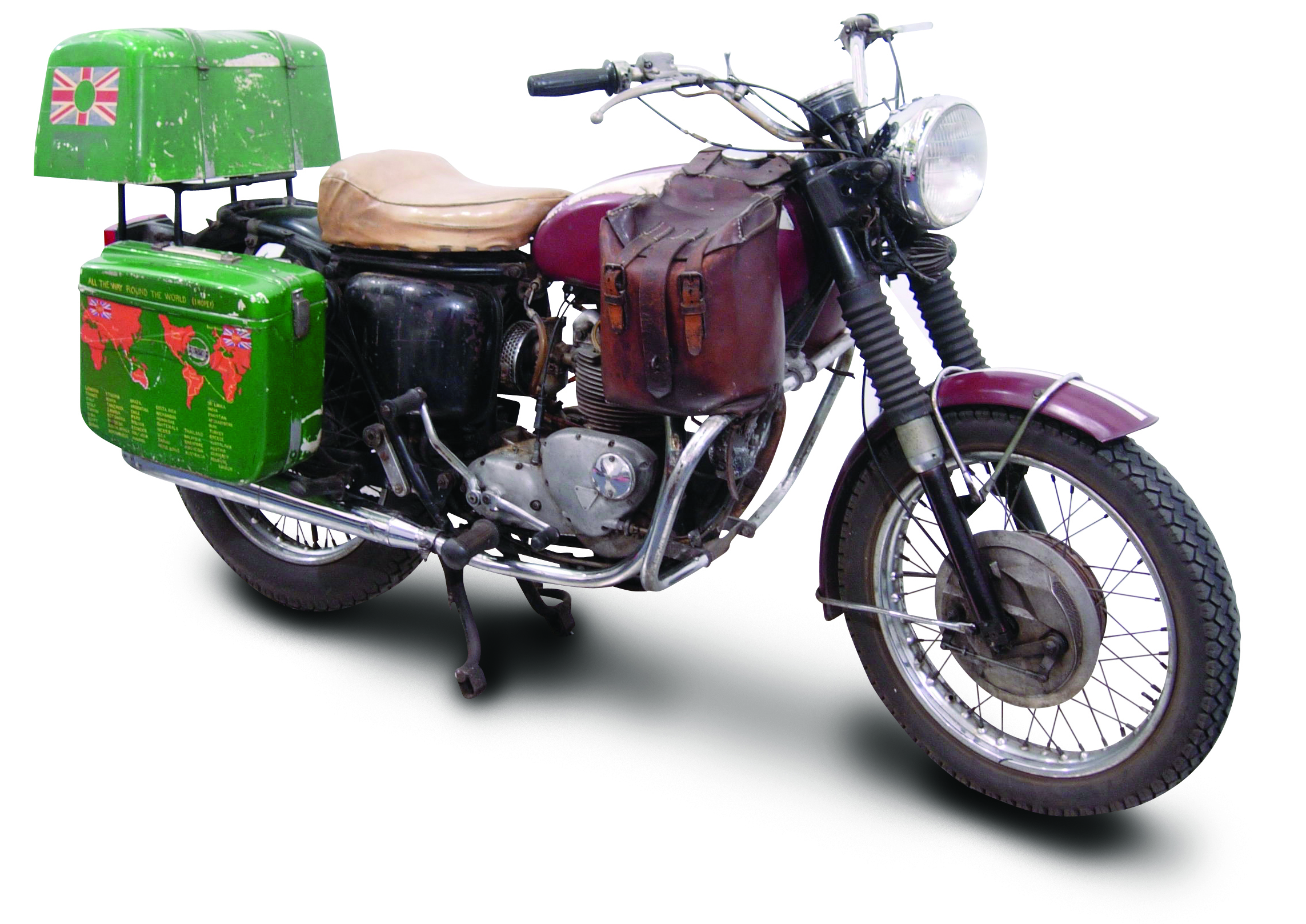 Another world tourer, this bike went around the world in just 8 months. In this trip, the bike went through 18,000 miles, through about 16 countries, across four continents. The sidecar was specially fitted out to carry spares and provisions and its panels display the route that was followed. 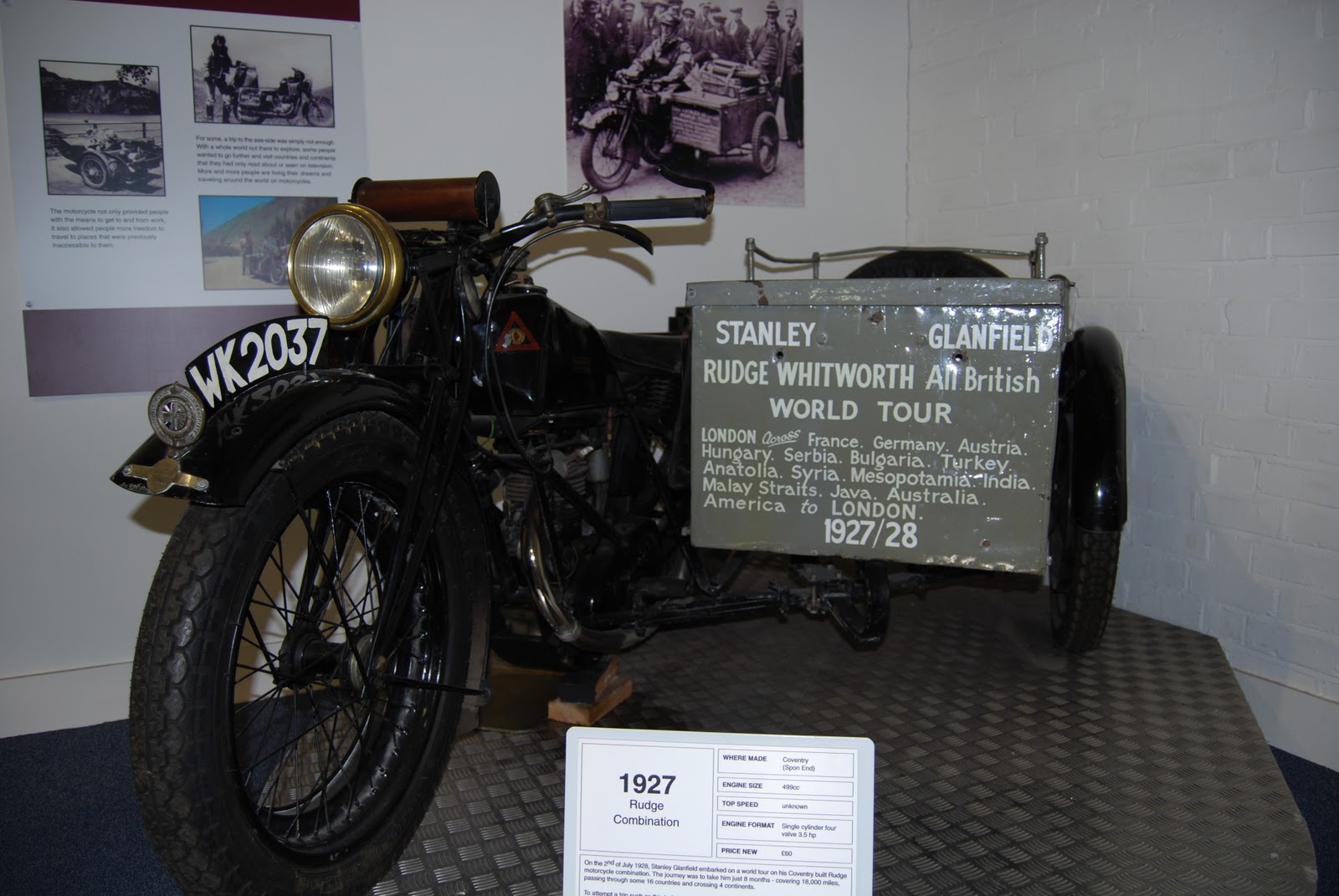 some of the other exhibits include more ‘conventional’ vehicles like including an Austin Allegro, an Austin Metro previously owned by Lady Diana Spencer, a Ford Escort MK2, Hillman Imp, Triumph Acclaim, Talbot Sunbeam, Talbot Horizon, Peugeot 206, Peugeot 405 and a DeLorean DMC-12 car made famous by the Back to the Future films.

In 2014, the museum went through a major redevelopment where they reconstructed 12 of the total 14 galleries. The project cost 8.5 billion euros and was funded by the Heritage Lottery Foundation, European Development Fund, Biffa Award and Garfield Westo. Under this project, both the Thrust2 and the ThrustSSC were relocated by specialist haulier from the Museum’s Spirit of Speed Gallery to the new Biffa Award Land Speed Record Gallery. The redevelopment project was completed and the new museum was opened in 2015.

We hope this article and the museum made you go