Asia Cup 2018: Pakistan Lost Against Bangladesh to Avoid India in the Final

Well, you can’t blame Pakistan. After all, they too are human beings. So it is fair for them to lose against Bangladesh to avoid the possible humiliation and third loss in the 2018 Asia Cup against India.

It wasn’t an extraordinary match for Bangladesh. After winning the toss, captain Mashrafe Mortaza sent his men to bat first. Barring Mushfiqur Rahim and Mohammad Mithun, none could be productive. Rahim missed out on his ton by a narrow margin as he stumbled at 99. A good support from Mithun added 60 runs to his tally as well. Bangladesh posted a total of 239 runs up in the scoreboard.

Whereas Pakistan’s bowling side was too good and Junaid Khan with 4 wickets and an impressive economy of 2.11 stood out. But of course, it all went in vain.

Inconsistency in maintaining a partnership cost Pakistan the match and made way for their exit from the tournament. Imam-ul-Haq (83) was his team’s lone warrior. The second highest score by a Pak batsman after Imam was 31 (Asif Ali), followed by 30 (Shoaib Malik) and 14 (Shaheen Afridi). The batsmen’s failure left Pakistan stranded as by the time they reached 50 overs, 9 of their batsmen was back in the hut for a mere total of 202. Gifting Bangladesh with a 37-run victory.

Mustafizur Rahman took 4 scalps and succeeded in breaking Pak batting’s backbone. Bangladesh fought their way to meet India in the final of the Asia Cup (yet again). In 2016, where the tournament was played in the 20-over format, Bangladesh had lost against the Men in Blue. However, this term, they’d be looking to change it. 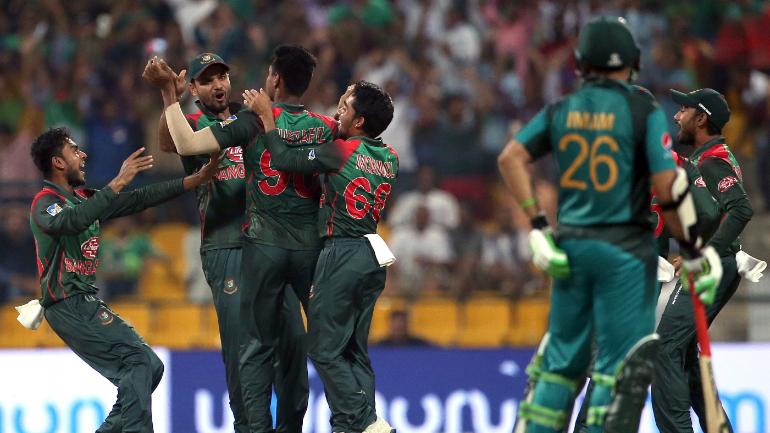 The Tigers have been impressive when it comes to Asia Cup as they have entered in three (2012, 2016 and 2018) out of previous four Asia Cup finals.
Tomorrow at 17:00 IST it’d be India and Bangladesh locking horns to be crowned champions of Asia at Dubai International Cricket Stadium. Stay tuned!